When I was younger, I worked with my dad on a project he was doing for his job. He is a Physics teacher and he had received a grant to write a new curriculum unit for teaching radioactivity and radiation literacy to college students who are not science majors. He specializes in education research and specifically in inquiry based teaching, a pedagogical scheme that focuses on students making their own observations and theories.

Inquiry-based teaching can be applied to things like newtonian mechanics fairly easily: students can make observations with the naked eye, as well as making quantitative measurements aided by things like ultrasonic distance detectors, speedometers, etc, to observe the behaviors of moving objects. It's natural to compare the visible behavior and the quantitative measurements, it just "makes sense".

However, teaching radiation with these methods presents a problem. You can't see radiation with the naked eye, except in extreme circumstances such as a Cloud Chamber. And even then, you aren't seeing the moving parts of radioactivity, just the after-effects of ion-trails left behind by particles that have high energy and interact with a lot of a atoms.

Of course, the equipment required to directly observe nuclear mechanics and radiation barely exists at all, let alone within the time and monetary budget of a typical college classroom. So he decided he wanted to simulate reality in an open-ended game-like computer program, and have the students base their observations on the simulations.

This is where I come in. At the time, I was about 16 years old, and I was heavily into modding video games and trying to build my own games in the Unity Engine. So of course, he saw what I was doing and asked if I could make an atom simulator game. That was how this whole project started.

At the time we didn't really know what kind of simulators would be needed or how the students would interact with the software, so it was definitely an iterative development process with a lot of feedback from the classroom. The development of these simulators took place on and off for about 7 years. Often times, my dad would try to motivate me to work on the project by sharing glowing journal entries from students in his class, talking about how they liked the simulator and enjoyed playing with it.

Anyways, recently he texted me and said that a bunch of folks using his curriculum unit in Europe were running into errors when launching the simulators after the most recent Windows update. So I dusted off the old unity projects and went through the arduous process of updating them through 5+ years of Unity API changes. 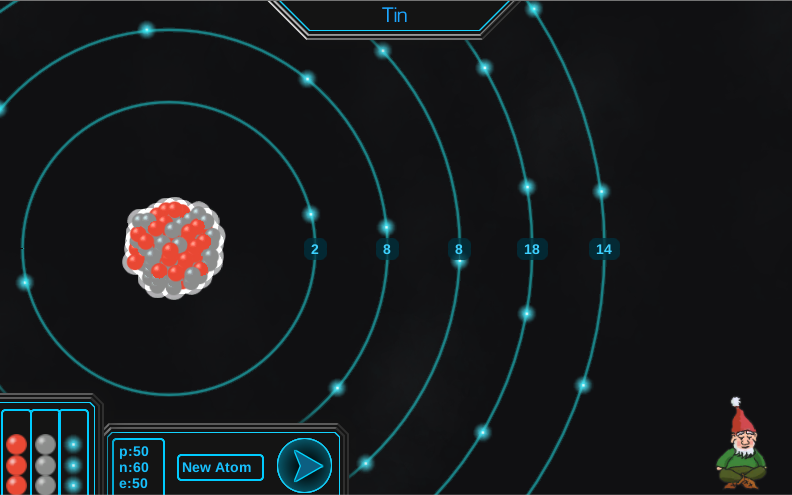 At this point, all three of the simulators have been updated for Unity 2018.4.17 LTS and I've uploaded them to the inquiry-into-radioactivity-simulators organization on Github.

These days, Unity has a WebGL build target that allows you to publish interactive realtime content for the web, with no plugin required. This is really great, because we don't have to install software on the computers in the classroom, just have the students visit a web link. So, if you want, you can actually play with the simulators right now via the GitHub Pages for each repo!

The Unity Web GL build process is comical, but it actually works. From C# code to .NET Intermediate Language, to C++ source code, to asm.js, to the browser. It's a long journey, but the IiR simulators have made it! So here's to another 10 years of learning radioactivity through inquiry, and cheers to anyone who wants throw me a pull request and help maintain the crappy Unity code I wrote when I was 16 😄